This letter was sent on official letterhead, but that was not acknowledged in the response; this opinion is strictly personal, and does not reflect nor is it meant to represent or negate in any way the opinions of others:

I resolved to write twelve letters for each month of your last year in office, but that was not to be. So here, this first letter expresses my original intent in our 2016 edition of Black History Month. It is my belief that though they are vital, laws and other legal maneuvers can barely mitigate the reign of terror on body, psyche, and spirit of Black Americans. It is daily numbing to even contemplate the insidious nature of racism, its effects, and its legacy here in America. Even those who claim to know and understand underestimate the day-to-day horror and its global influences. Yesterday, The New York Times began selectively releasing information lingering in the recesses of its massive troves of information. I’m struck with how Lena Horne and Harry Belafonte acquired her Upper West Side penthouse in NYC. But those of us without means struggle hourly, inching closer to making our physical transition often without the audacity of hope. In my 75th year, it is my belief that Jazz must not continue to be whitewashed by sheer numbers, its history negated, its master artists reduced to handouts, and its American cultural and global contributions concentrated in footnotes in America’s history.

Yes, we are clearly outnumbered. If you follow things like “Jazz on the Tube,” or read the interviews that Jake D. Feinberg conducts in Tucson, AZ, it is immediately evident that master jazz musicians were nurtured in the homes, churches, and schools of America. Even when those homes were fractured, those churches legalistic and loathing of themselves and the music, and the schools insufficient in materials and supplies: jazz was nurtured. It was heard by the children as it floated in popular culture. From 1930 to 1970, arguably its most innovative and creative period, it was ubiquitous and its genius apparent. It reached its peak then, never to be surpassed. Now, it is taught in music schools and colleges here in the U. S.  and around the globe.  Japan may lead, but Europeans seem to have always appreciated and many understand.

Here in America, jazz programs abound nationwide and as students graduate from schools and colleges seeking careers, they swallow up all possibility of performance opportunities for jazz masters; what is also painfully missing are those children in the inner city who should own this legacy, whose ancestors were innovators and masterful artists and who are not being taught the history nor the practice of jazz. Even those recognized as spokesmen like Wynton Marsalis and his family, Tony Bennett (and Lady Gaga), Sonny Rollins (also honored at the White House), and a few others cannot mitigate the far-reaching American cultural neglect: we are simply outnumbered and always have been– a minority people. Parents who can most often afford the JALC (Jazz at Lincoln Center) programs do not often come from the marginalized inner city. The schools in Harlem and Brooklyn, for example, have few if any opportunities to teach, much less practice jazz. Many “jazz in the schools” programs are limited and dutiful. One person we know, Mike White, has taken several schools with students not likely to succeed and created powerful debate teams, but nothing exists like this for jazz music.

The creation of American culture through media and Hollywood has always distorted what is real and created a fabricated culture that has become global. During its most creative and innovative period, only glimpses of jazz were possible in media: short-lived shows, guest appearances, and other such things, without recognition of what was truly being created. The focus then and now was on societal pathology blaming musicians for what was created by a racist underbelly. Now, it’s rare to see or even hear jazz anywhere in media except perhaps WBGO-FM in Newark, NJ, and some college radio stations that may even share airtime with classical or even other eclectic programming. The Jazz Industry is thriving but it excludes musicians: club owners, teachers/academics, writers, journalists, record producers, magazine and small newspaper publishers. The cliché is a jazz musician’s woman is (h)is support. A few marriages and relationships may survive this arrangement I suppose. But the hidden danger is always to underestimate or ignore the malevolence of racism, its legacy, and its effects on individual daily behavior that drives and thrives in the ghettos. Moreover, the occupational hazards of liquor and women (and still drugs) remain. To black churches, jazz is as taboo as LGBT issues and supports mostly real violence of spirit, leaving only an occasional historic Black church like Abyssinian Baptist in Harlem to bury jazz masters. The occasional Vespers notwithstanding!

This means jazz history is being whitewashed and/or buried beneath lies of longevity = mastery. There are many competent jazz musicians who bring little if any creativity to their craft. Individuality is now gone! How can one distinguish between any artist of the highest caliber (Joe Overstreet, Elizabeth Catlett, Eldzier Cortor) and others who are merely competent? Duke Ellington’s orchestra or those orchestras that remain and perform weekly as legacy ensembles? Young piano sensation Joey Alexander featured on Sixty Minutes or Kojo Roney (Wallace Roney’s nephew) who at age 11 has been drumming for five years with little media recognition? Nowadays, there are people copying masterpieces like Miles Davis’ “Kind of Blue” note for note and releasing it Blue for public consumption. But then most jazz now is copying or trying to copy what was done in the heyday of the music. There are still some who were taught by jazz masters (those who would share—George Cables reminds us that unlike Art Tatum not everyone would share!) like George who take even standards and put their personal imprint clearly on them. We may see him in the documentary “Sound of Redemption” about Frank Morgan, but as Juini Booth reminded me there was another Frank (Butler) in California who may not be remembered at all. When I heard the great baseball player Monte Irvin speaking with Jazz Master Jimmy Heath about the indignities and challenges of traveling when the Negro Leagues and Jazz collided, I knew that the history was being buried along with the bodies.

Now jazz greats are being reduced to misrepresentations of themselves. After a minor fall and recuperation, for example, Louis Hayes has no consistent place to play and regain his stage chops. Yes, the music is in his body, but lack of performance opportunities reduces his ability to mere practice, and that’s not nearly enough. And, he reminds me, how about taking care of his family. After having weekly work at Minton’s for two years, all musicians were “fired” without future prospects. All were competent, relaxed, and mature jazz artists. A fledgling jazz club in Harlem Cassandra’s Jazz & Gallery is facing closure without recourse.

Sure JALC is popular with tourists and others of means. Their resident savant Phil Schaap (cousin of journalist Dick Schaap) continues his intimate daily practice of “Bird Flight” at Columbia University’s radio station, and his newsletter offers memorabilia monthly. He must be one of the busiest and most knowledgeable jazz historians in the country and his teaching schedule is more than impressive. Others like drummer Kenny Washington “The Jazz Maniac” teaches at Julliard along with folks like trombonist Steve Turre. They have studied with and learned from the masters and now pass their knowledge to others. Nevertheless, most of this knowledge does not reach the “disadvantaged” or “marginalized” in the inner cities. And there is no plan to put music back in the schools along with the history of jazz as required by 21st Century directives. Now it would be easier than ever in the digital age to access the history and practice of jazz masters and innovators, but we must gain the will and the wealth to do so.

Right now, established, masterful jazz musicians are often just given handouts. Sort of like the Missionary Offering in church that is used to send items to Africa or build a church edifice named after the home church in another foreign land. People will not speak ill of JFA (Jazz Foundation of America), for its saving grace was and is the Musicians’ Emergency Fund. Money is raised to assist those musicians in dire straits: loss of an instrument, inability to pay rent, serious health concerns, and death. JJA (Justice for Jazz Artists) struggles, unable ever to get club owners to pay for basic needs like a retirement fund. When we apply for funding from City, State, or Federal governments, we are met with bare minimums. In one case after much paper work, we were granted $850. And in another $1,100. The most we were given was $8,500.  (for three projects whose total was perhaps $48,000. Of that, one venue required $5,000. up front for its use. So as you know, it’s a pittance especially when millions upon millions of dollars are given daily.

In spite of it all, Mr. President, I will continue with my life’s work in retirement: to assist these Jazz Masters and master music artists and find ways to introduce our inner-city youth to the legacy of their genius. I welcome any suggestions of course that will enable any of this to happen. So, I am writing to suggest:

It is absolutely NOT true that Jazz can be lumped in with all musical categories. “American Music Abroad,”  a partnership between American Voices and the U.S. Department of State’s Bureau of Educational and Cultural Affairs seems to have an announcement that thinks “traditional American genres” are defined (but not limited to) Contemporary Urban, Hip Hop, Jazz, Blues, Rock & Roll, Indie Rock, R & B, Broadway Musical Theater, American roots music, e.g. Country Gospel, Soul, Bluegrass, Zydeco, Cajun, etc. This misunderstands the place of Jazz and its contribution to world music, and dismisses the efforts of Mr. Conyers and other members of Congress who understand that Jazz stands alone as America’s Gift to the world of Music. Only Jazz incorporates all other types of music in its basic system with blues as its foundation. If its roots were in any other than Black American Life and Culture, it would be given the attention it rightly deserves. I support H. R. 1682 of the 1st Session of the 114th Congress and all those who helped sponsor it (and all previous bills) last March. I am thankful to them for their efforts. God bless them and America.

We need a cultural center in New York City that will invite disadvantaged youth to learn about the history of Jazz and be mentored by Jazz Masters and other master artists with minimal costs to the youngsters. We must reach out to these youth and have them understand and own the genius. It must include a performance space that musicians can use with rehearsal and recording capabilities. There should also be short-term residential space and instruments available to students. I know it’s a dream, but one I willingly share.

Thank you for your time and attention in this my first letter of 2016.

Not only did I NOT think this letter would be read, I never thought it would even be acknowledged. But here, folks, is the response I received. No, I have not yet written again, but I plan to do so, including many others who love and care about the music, for even in the Smithsonian’s grand new attraction: The National Museum of African American History and Culture, I fear the music will be given a token representation. That may be all we can expect at this moment. But let’s advocate for so much more! 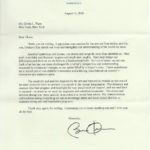